The site is secure.
The https:// ensures that you are connecting to the official website and that any information you provide is encrypted and transmitted securely.

It seems so simple—Dial three numbers, and like magic, help is on the way. As the famous author, Arthur C. Clark, so aptly stated, “Any sufficiently advanced technology is indistinguishable from magic.” 911 uses very advanced technology to make sure that callers get the help they need. This memo illustrates how Vermont’s 911 system connects a caller with the appropriate help.

The Vermont Enhanced 911 Board is one of the first to implement a next generation statewide 911 system that delivers 911 calls from the Public Switched Telephone Network (PSTN) to a Public Safety Answering Point (PSAP) using Voice Over Internet Protocol (VoIP) over its Emergency Services Network (ESINet).

Currently the State of Vermont 911 System consists of six diverse locations collectively serving as one statewide 911 system. 911 calls are initially routed to one of these answering points based on the originating caller's location. The map below depicts the PSAP's coverage areas. 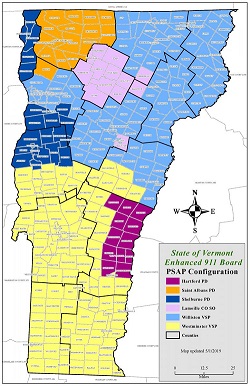 Call flow through the system

Vermont has an Enhanced 911 system. Enhanced means that the system is usually able to locate the caller. To do this it uses an Automatic Location Information (ALI) database. The ALI database contains the location of every wired telephone in Vermont. Cellular phones are not in the ALI database; they are located through a third-party location service. Once the system knows the caller’s location, it routes the call to the correct Public Safety Answering Point (PSAP). The following diagram illustrates how the 911 system determines where a caller is located and where to send the call: 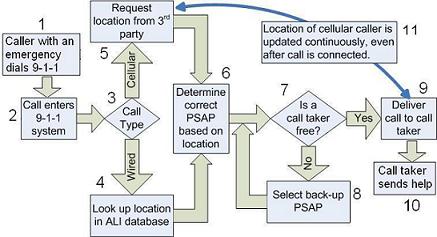 It looks complicated because it is. To better illustrate the call flow, let’s follow a typical call through the system.